Purple toadflax (Linaria purpurea), a plant of garden origin that seems quite at home along the Brook.

The latest newsletter is issue 70

About Friends of Cherry Hinton Brook 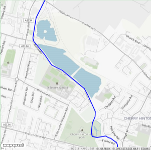 Cherry Hinton Brook flows through the eastern suburbs of the City of Cambridge, UK. It rises near the nature reserves on Lime Kiln Hill and flows north-west through Coldhams Common to the River Cam. Kingfishers are commonly seen, symbolising the special nature of this pleasant green corridor.

The Brook and its adjacent footpaths link the people and wildlife of Cherry Hinton to Cambridge City, Coldhams Common and the River Cam. Snakey Path, which runs alongside the Brook from Daws Lane to Burnside, and on to Sainsbury’s supermarket, is a very busy route for walkers and cyclists.

Friends of Cherry Hinton Brook are a group of mainly local residents who banded together in June 2009, initially triggered by the need to clear the rubbish from the Brook and its environs, particularly between Cherry Hinton Hall and Sainsbury’s.

Keep the Brook and its surroundings clean and attractive: we organise regular litter picks in early Spring and late summer/autumn, and as part of the Rivercare network have equipment for this purpose. We also inform the City Council when any particular clearing or maintenance activities are needed.

Work with Sainsbury’s to improve the appearance and health of the Brook in this area: With the help of FCHB, Sainsbury’s has installed an interpretation board outside the store, put rubbish bins along the path between the Brook and the store, put up nest boxes and a bee hotel in the car park area, and tidied up the loading/unloading area behind the store which was a major source of litter. There is noticeable improvement but more work is still needed to make the area attractive and free from litter.

Provide information about the wildlife of the Brook: we have raised funding through a Sustainable City Grant for information boards to be installed at key points along the Brook to tell people about its value as a wildlife corridor.

Look after the wildlife of the Brook: FCHB members, with the help of experts such as the Cambridge Natural History Society, monitor the wild plants and animals of the brook and its surroundings. Did you know, for example, that the rare water vole has taken up residence here? Or, that in the spring, hundreds of frogs, toads and newts cross Burnside (Road) to breed in the Brook? We have helped to save many of these animals by putting up notices and even assisting them cross the road (the pavement edge often blocks their way).

Keep in touch with other organisations: we produce a newsletter on an occasional basis that gives more details about our concerns and activities. We liaise with many individuals and organisations including the Drainage Engineer, Nature Conservation Projects Officer and Street Scene at Cambridge City Council, the Territorial Army, Sainsbury’s, local allotments associations, Cherry Hinton Angling Club, Friends of Cherry Hinton Hall, Keep Britain Tidy and the Cambridge Natural History Society.

Please note that access to the lakes adjacent to Cherry Hinton Brook is restricted to authorised individuals only (e.g. members of Cherry Hinton and District Angling Club and emergency services). The general public is not permitted to enter the lakes or immediately surrounding area.

FCHB members are daily users of the route and have become its “eyes and ears”, reporting potential pollution, fly tipping, wildlife in distress and unusual wildlife sightings (anyone may report a sighting to us at wildlife@friendsofcherryhintonbrook.org.uk). Why don’t you join us?